Typhoon Vamco made its first landfall on Patnanungan Island (Quezon Province, Philippines) around 10:30 PM local time on November 11 as a category-1 equivalent on the Saffir-Simpon scale. The typhoon then gained category-2 strength before crossing Quezon and then Luzon. The system caused extensive flood damage, with Metro Manila seeing its worst flooding in years. Disruption to power and drinking water infrastructure has been reported, along with considerable property damage. After moving through Luzon and crossing the South China Sea, Vamco made final landfall as a category-1 north of Da Nang (South Central Coast region, Vietnam) on November 15 at 5 AM local time. [caption id="attachment_53766" align="aligncenter" width="750"] 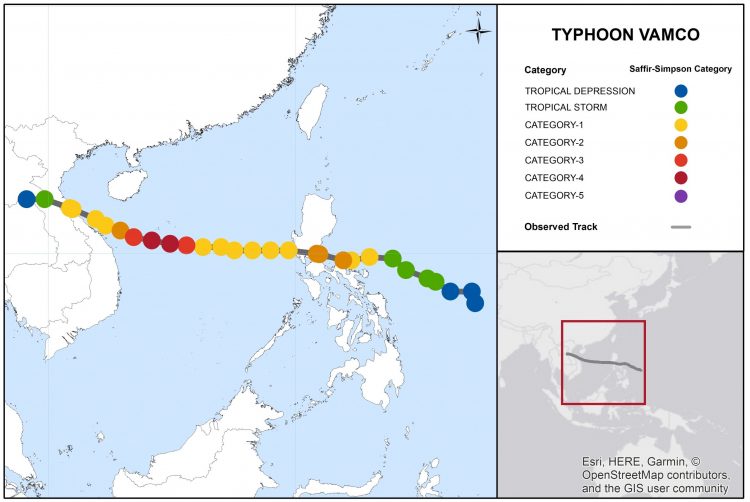 Typhoon Vamco triggered extensive flooding in the National Capital Region and in other provinces in Luzon, in particular in Cagayan and Isabela. As of November 18, at least 73 fatalities were reported with at least 12 missing. According to the Philippines’ Department of Social Welfare and Development (DSWD), over 3 million people were affected by the event in the National Capital Region, Ilocos, Cagayan Valley, Central Luzon, CALABARZON, MIMAROPA, Bicol and Cordillera Administrative Region. More than 300,000 people had to take shelter in over 2,400 evacuation centers, and over 25,000 police officers were deployed to assist in first-response operations across Luzon.

Seven dams along the track of Vamco opened their gates to release water, causing flooding in multiple provinces. The National Disaster Risk Reduction and Management Council (NDRRMC) reported 173 incidents of flooding and 38 different landslides. Preliminary estimates from the Department of Public Works and Highways (DPWH) point at infrastructure damage in excess of ₱ 6.37 billion (USD 132 million).

Disruption to energy and water supplies was widespread.

Tens of thousands of buildings were submerged in Metro Manila, some of them up to rooftop-level. Floods were particularly destructive in Marikina City, where according to preliminary DSWD estimates about 40,000 houses were partially damaged and 4,500 damaged beyond repair. About 30,000 houses were affected in Barangay Nangka, over 8,000 in Barangay Tumana, and more than 5,000 in Barangay Malanday. Preliminary estimates from local officials point at a total of ₱ 44 billion (USD 911.7 million) worth of damage in Marikina City only. According to the DPWH, infrastructure damage in Marikina City alone might exceed ₱ 4.2 billion (USD 87 million).

The northern Provinces of Cagayan and Isabela were devastated by floods and multiple landslides triggered by the heavy rains brought by Vamco. According to local authorities, certain areas experienced the worst flooding in about four decades.

The water level in the Cagayan River was already high due to heavy rainfall of previous weeks, and quickly rose further after the six gates of the Magat dam were opened to prevent overtopping. According to the National Irrigation Administration-Magat River Integrated Irrigation System (NIA-Mariis), about 6,000 cubic meters per second of water was released. This triggered extensive flooding that wreaked havoc in 22 cities and municipalities in Cagayan province, and in 25 cities and municipalities in Isabela. Tuguegarao City (Cagayan Province) was heavily affected, with some barangays submerged by over 4.5 meters of water. At the time of writing tens of villages in the two provinces are still isolated.

Interruptions to power supply affected portions of both Cagayan and Isabela Provinces.

In Bulacan Province, just north of the National Capital Region, several villages were submerged by water after the Ipo and Angat dams opened their gates to release water. Meanwhile the dams of La Mesa, Ambulao, Binga, and San Roque had to open their gates to release water; this caused floods and landslides in the Pangasinan and Benguet Provinces. The six gates of the Magat dam were also opened to avoid spilling, and 15 municipalities in Nueva Vizcaya Province and five municipalities in Quirino Province were inundated. Several landslides hit the Quezon Town area in Nueva Vizcaya. Flooding also affected 35 out of the 41 municipalities of Quezon Province, where evacuation advisories were issued for more than 14,000 families.

Flights were suspended and the Ninoy Aquino International Airport was temporarily closed. Port operations stopped, and mass transit in Metro Manila came to halt. In Metro Manila four ships crashed due to the strong winds and waves.  A ship cargo vessel struck the sea wall in front of a mall in Pasay City, while a barge collided with Marcos Highway bridge. A tanker was stranded aground and almost hit a dike in Barangay Sipac Almacen-Navotas West area, and an abandoned fishing vessel collided with a bridge in Navotas.

The typhoon affected more than 71,400 hectares of agricultural land in Ilocos, MIMAROPA, and Bicol. Preliminary estimates from the Department of Agriculture suggest that floods and landslides caused over ₱ 2.72 billion (USD 56.2 million) in agricultural damage. About ₱ 1.11 billion (USD 23 million) worth of rice were lost, along with ₱ 700 million (USD 14.5 million) of high-value crops, and ₱ 585 million (USD 12.1 million) of fisheries. Extensive damage was also reported to livestock and poultry, as well as to irrigation facilities and agricultural machinery.

The DPWH estimated damage to infrastructure to be in excess of ₱ 6.37 billion (USD 132 million). At least 236 sections of road and 98 bridges in 7 regions were damaged, along with flood control structures and other public assets. The Bicol region withstood substantial damage amounting to over ₱ 3.3 billion (USD 68.3 million).

According to the NDRRMC and the National Grid Corporation of the Philippines, blackouts affected 312 municipalities and cities in the National Capital Region, Ilocos, Cagayan Valley, Central Luzon, Calabarzon, MIMAROPA, Bicol and the Cordillera Administrative Region. Eight 69-kilovolt transmission lines were damaged by the strong winds, causing blackouts affecting areas of Metro Manila as well as the Cavite, Bulacan, Laguna, Rizal, Aurora, Cagayan, Albay, Quezon, Isabela, Nueva Ecija and Mountain Provinces. The National Electrification Administration said in a statement that damage on power facilities amounted to over ₱ 107 million (USD 2.2 million).

Disruption to water supply was reported in over 50 cities and municipalities. Various water concessionaires announced service interruptions affecting the National Capital Region and the Provinces of Cavite, Bulacan, and Rizal.

According to the Philippines Department of Education, Vamco damage affected about 1,190 schools across 67 divisions in the National Capital Region, Ilocos, Cagayan Valley, Central Luzon, Calabarzon, Mimaropa, Bicol, and the Cordillera Administrative Region. Over ₱ 3.7 billion (USD 76.6 million) will be required for repair and rebuild. The Department of Health announced that multiple health facilities were damaged in Central Luzon, Cagayan Valley, and Cordillera.

The system was initially identified on November 8 by the Japan Meteorological Agency (JMA) as a tropical depression north-northwest of the Palau. The Philippine Atmospheric, Geophysical, and Astronomical Services Administration (PAGASA) and the United States Joint Typhoon Warning Center (JTWC) initiated advisories soon after. As the system entered the Philippine Area of Responsibility, PAGASA assigned it the name Ulysses.

By 3 PM (Philippines Standard Time) on November 9 the system had already gained tropical storm strength. The JMA gave it the international name Vamco. The system gained strength while tracking northwest towards the Philippines, and it was upgraded into a severe tropical storm by both PAGASA and the JMA. On November 11 both agencies further updated it into a typhoon.

Vamco made its first Landfall on the Island of Patnanungan (Quezon Province) around 10:30 PM local time on November 11 as a high-end category-1 equivalent on the Saffir-Simpon scale, with 1-minute sustained wind speeds of around 150 km/hr (90 mph). After reentering ocean waters, the typhoon further intensified and reached its peak intensity while in the Philippines Area of Responsibility, with 1-minute sustained winds of around 177 km/hr (110 mph) and central pressure as low as 961 hPa. Vamco made two landfalls in Quezon as a high-end category-2 around 11:20 PM on November 11, and 1:40 AM on November 12, respectively on Burdeos (Polillo Island) and General Nakar.

The storm continued to track westward and progressively weakened while moving across Luzon, and entered the South China Sea through Zambales Province as a category-1 equivalent typhoon.

Vamco continued to move westward while gradually intensifying again, and it left the Philippine Area of Responsibility around 9:30 AM on November 12. The typhoon then underwent a period of rapid intensification while tracking toward Vietnam, and reached its peak intensity as a category-4 equivalent on November 13.

While approaching Vietnam, Vamco progressively weakened. It made landfall about 100 km (62 miles) north of Da Nang (South Central Coast region) as a low-end category-1 equivalent typhoon around 5 AM (Indochina Time) on November 15. 1-Minute sustained winds at landfall were around 130 km/hr (80 mph) per the JTWC. A weather station on the nearby Lý Sơn island measured hourly sustained winds reaching 100 km/hr (62 mph), and gusts as high as 115 km/hr (71 mph). Soon after landfall, the system was downgraded by the JTWC to a tropical storm while moving inland to the northwest. [caption id="attachment_53771" align="aligncenter" width="720"] 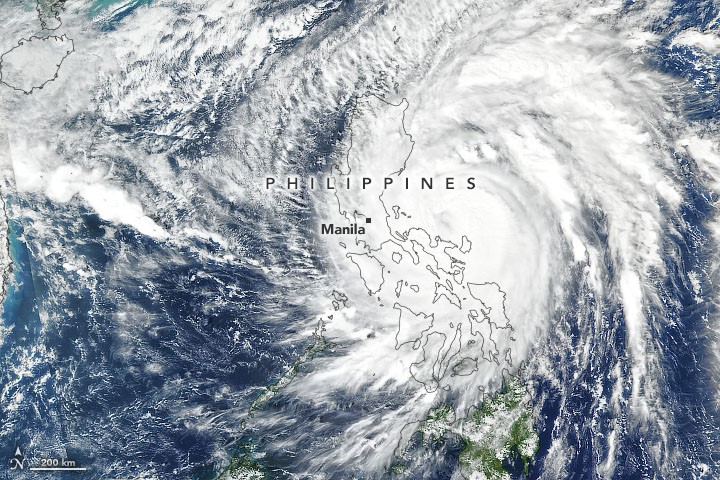