In The Changing Nature of Risk report recently published by Guy Carpenter, we analyze how an accumulation of losses from recent extreme weather events, the specter of climate change and higher loss cost trends in a number of long-tail business lines are forcing carriers to reassess views of risk. Capital inflow levels and risk appetites are responding accordingly.

The (re)insurance sector has a long history of responding to periods of change and is well versed at navigating market-defining events such as Hurricane Andrew, the  terrorist attacks of September 11, 2001 and Hurricane Katrina. Reinsurance has been a reliable and efficient source of contingent capital to insurance companies through these different market cycles, acting as an effective shock-absorber for the primary market.

The years 2017 and 2018 were no different – a series of sizeable events led to the most costly two-year period ever for insured catastrophe losses. After years of strong capital growth, the reinsurance market has been resilient to these losses and conditions remain largely favorable to cedents. But as recent developments have shown, events that challenge underwriting risk assumptions can still impact capacity deployment.

Reinsurers operating in the Florida market, for example, have reassessed their views of risk to reflect increased social inflation costs associated with Hurricane Irma. Due in large part to complex (and longer-tailed) loss drivers such as loss adjustment expenses and assignments of benefits (AOB), no other hurricane loss in recent history has developed adversely to the duration and extent of Irma (see Exhibit 1). In fact, loss creep from Irma has been one of the more significant "events” to impact the sector over the last year or so, with reinsurance carriers incurring the bulk of the incremental costs. 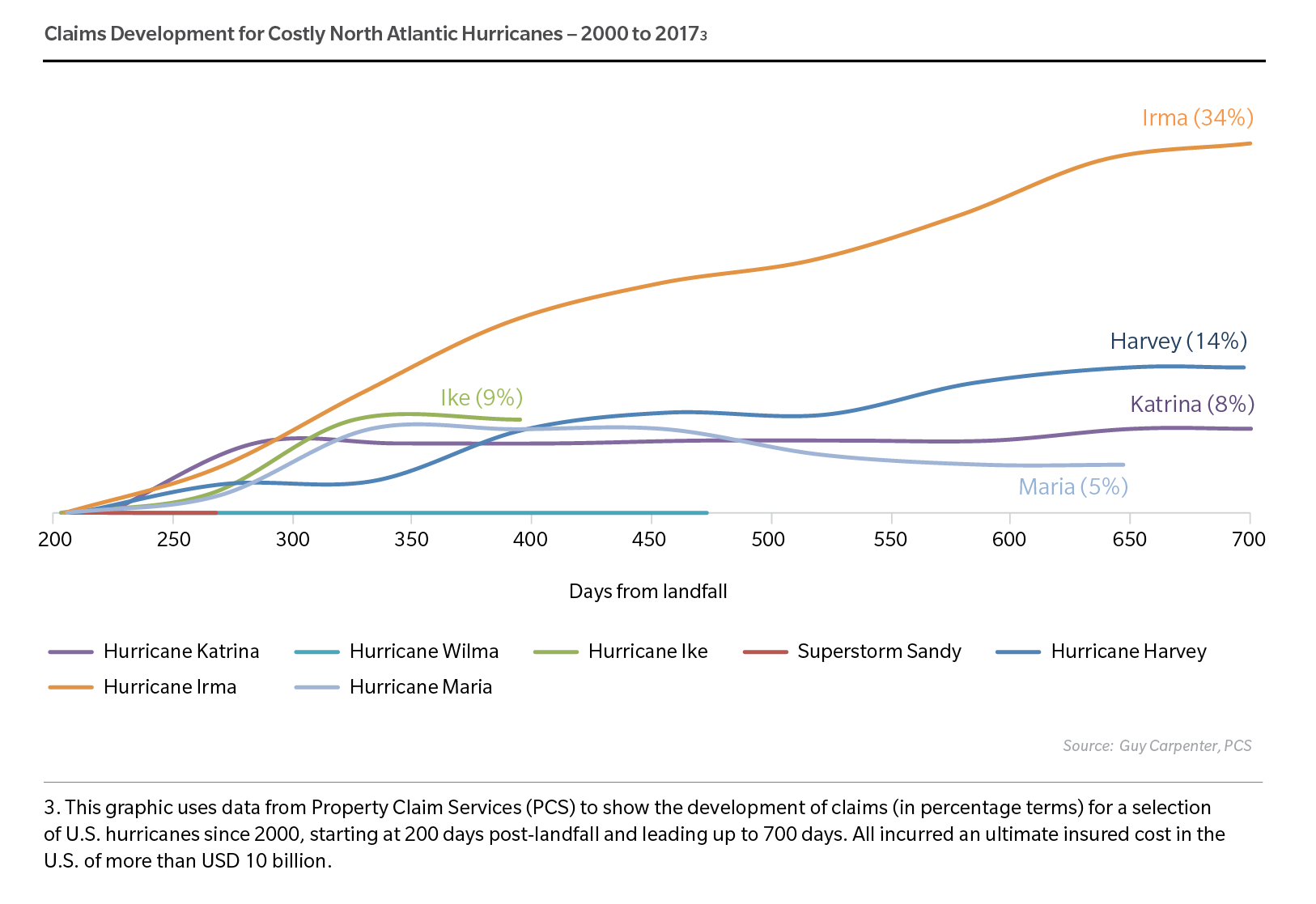 Additional insured catastrophe losses in 2018 have added to loss burdens. These included Typhoon Jebi, the strongest typhoon to hit Japan in 25 years, and yet another prominent example of adverse development that has seen losses end-up significantly higher than initially expected. Most insurance and reinsurance carriers have been forced to increase loss provisions for Jebi by meaningful levels this year and, as a result, it has become one of the largest ”events” to hit the market so far in 2019.

Creep from Hurricane Michael has exacerbated the situation. Even though the storm only made landfall in the Florida Panhandle in October, and there was severe property damage in affected areas (potentially resulting in less scope for AOB claims), estimates from PCS at the time of writing show losses have developed adversely by approximately 45 percent from initial expectations.

Costs for non-peak perils in recent years have also accumulated to make a significant contribution to industry losses. Wildfires especially have come under close scrutiny after losses in California in 2017 and 2018, as well as Canada in 2016, spiraled to become significant reinsurance and retrocession events. In fact, insured losses from wildfire activity in California in both 2017 and 2018 surpassed the combined costs of any previous decade: a striking statistic. Such outsized losses are not commensurate with a view of risk that has traditionally considered wildfire to be an attritional or secondarily peril (see Exhibit 2). 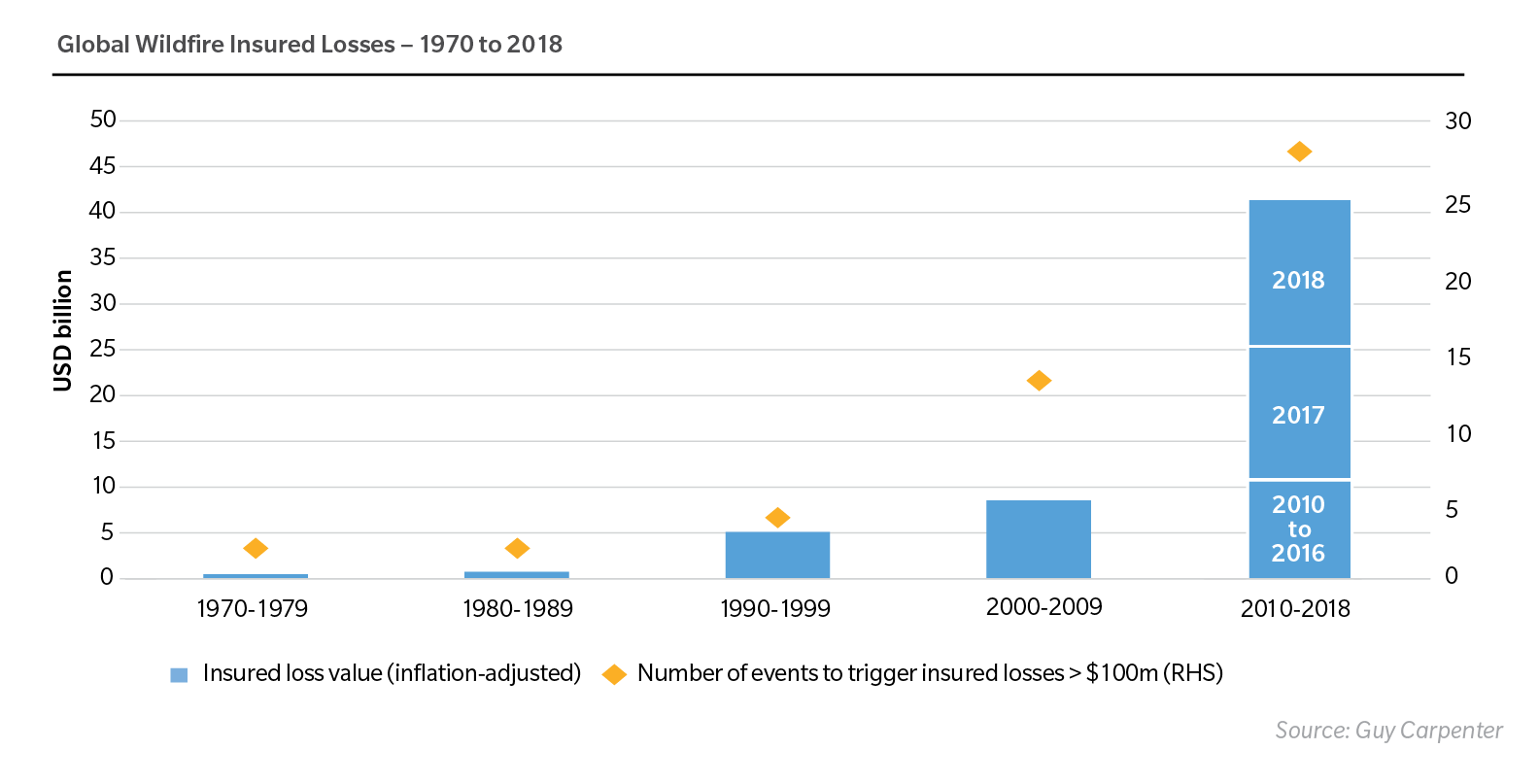 Underlying assumptions are therefore being reassessed to reflect more closely the contribution wildfires and other "attritional” perils can make to overall expected losses. The accumulation of losses from diverse perils is a trend that is occurring globally. Carriers have generally believed that a global spread of risk provided diversified premium, and that capital could be ”reused” in non-correlated zones – until multiple peak zones were hit by a series of events in a relatively short period of time. Risk perceptions are changing as a result, which inevitably impacts supply and demand dynamics.

A MARKET IN TRANSITION

Ominously, the specter of climate change only points to a future that will see more frequent and severe weather events. Excessive rainfall and rising sea levels clearly bring an enhanced threat globally for more frequent and severe freshwater and coastal flood events. And sustained trends around increased wildfire activity and stalling hurricanes are thought to potentially have some link to the changing climate. Risk models, already under scrutiny due to the magnitude of loss creep for virtually every major loss sustained in the last couple of years, will need to be recalibrated. If the last two years provide any sort of template for what can be expected in years to come, loss development for major events will be uncertain and the scale and severity of "attritional” perils will accentuate protection gaps.

All this has inevitably impacted the market and brought about a period of reflection as capital inflows into the reinsurance sector have slowed. Insurance-linked securities capacity has been curtailed so far this year, with investors more disciplined in deploying capital and more determined to achieve higher returns. Market conditions have tightened as a result, and further sizeable losses in the coming months and years, particularly if they include ”shock” catastrophe events, could still create conditions for additional market corrections.

Another possible challenge to capital resilience comes from a more adverse claims environment in certain areas of the casualty market. After years of largely favorable conditions, such as a benign inflationary environment and historically low loss experiences in longer-tail lines, a combination of social inflation, increased severity and growing instances of adverse reserve development are starting to squeeze carriers’ margins in a number of liability lines. Adding to this pressure is the erosion of property lines’ margins, dampening any cross-subsidization.

In the United States specifically, social inflation appears to be driving loss cost trends higher across a number of liability lines. Indeed, spiraling litigation, a more active plaintiff bar, higher costs and more generous jury awards (and attitudes) have coincided with some prominent carriers rethinking underwriting appetites and pulling back or withdrawing capacity.

While the long duration and lack of clarity around overall claims for long-tail business makes it difficult to gauge the adequacy of underwriting, there is growing evidence that loss cost pressures are building in certain areas. The recent (and often notable) pricing increases observed in several business lines support this theory.

This is significant because the casualty market has been the main catalyst of nearly all past market turns and it comes at a time of diminishing reserve redundancies. Given the smaller pool of carriers operating in the global casualty market, replacing lost or reduced capacity can be difficult, making it more vulnerable to capacity constraints should carriers’ claims assumptions change.

How the risk landscape evolves from here will be pivotal in shaping the future of (re)insurance. The impending degree of change that is to come with climate change, technological disruption, the shift from tangible to intangible assets and the transfer of liability from individuals to large manufacturers looks set to transform the risk landscape like never before.Insurability is likely to become a key challenge for the sector as there is a dearth of data and modelling solutions for many of these new exposures. There are even questions around the insurability of some established risks like extreme weather events, given that the long-term trends associated with climate change remain difficult to measure, predict and, ultimately, model.