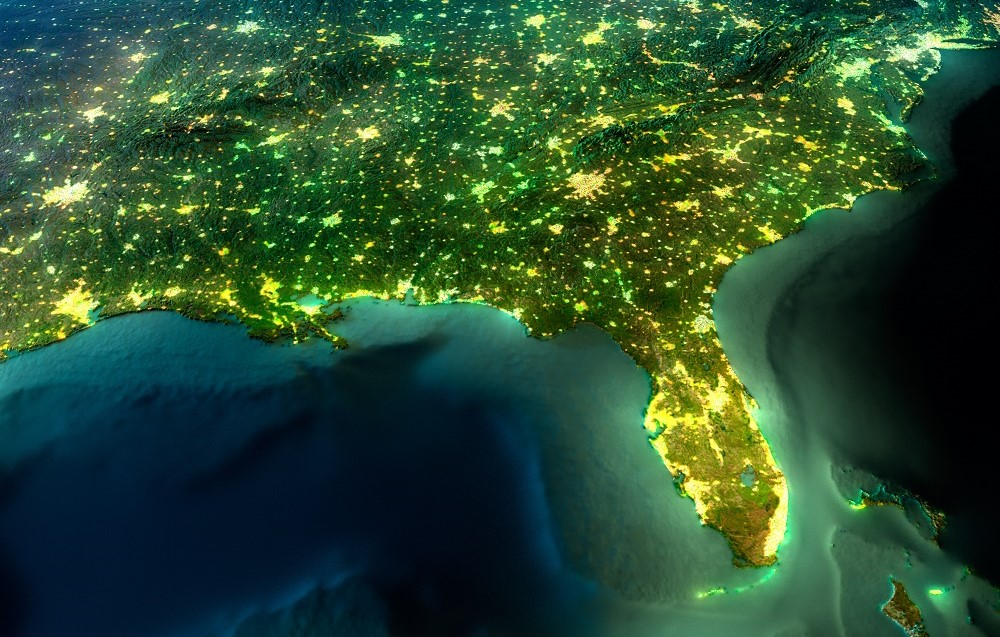 As of Thursday September 9, the following companies have issued insured loss estimates in association with Hurricane Ida, according to media reports (losses in Billions USD). 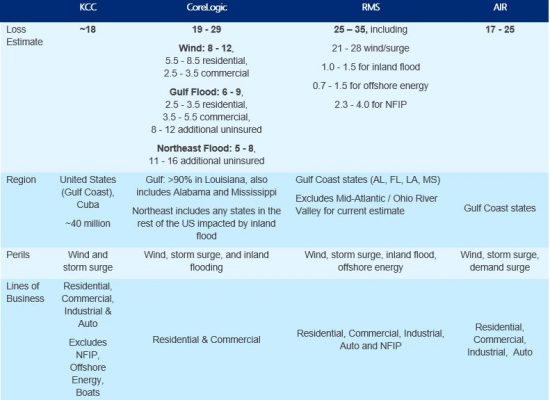 At least 50 deaths have been reported in six Eastern states, as Ida’s remnants overwhelmed rivers and sewer systems and spawned several tornadoes.

In Wilmington, more than 200 people were rescued after the Brandywine River reached record levels, flooding roads, bridges, and homes.

Four deaths were reported in the state and more than 450 water rescues occurred in Montgomery County. More than 900 people were told to evacuate along the Schuylkill River in Philadelphia due to deteriorating conditions. Flooded apartment complexes and homes, and submerged vehicles were reported in the Center City neighborhood where the Schuylkill River was more than four feet above flood stage.

At least 27 deaths in the state have been blamed on Ida, with the majority from vehicles caught in flash floods. In Elizabeth, New Jersey, four deaths occurred in an apartment complex and nearly 600 people were forced from their homes due to rain and river flooding, according to the town’s mayor. An EF-3 tornado in Mullica Hill damaged homes and vehicles, according to the National Weather Service.

There were 17 confirmed deaths in New York; four in Westchester County and the remainder in New York City. Nearly 500 vehicles were abandoned on flooded highways and at least 17 trains were trapped by flood waters.

One death was reported in the state after a state police sergeant died when his vehicle became trapped in rising flood waters. At least 18 people were rescued from flooded homes in Plainville, and in Bridgeport, emergency workers responded to stranded vehicles, where at least 22 streets were flooded.

Downpours from Ida’s remnants contributed to large stretches of a road collapse in Portsmouth, damaging vehicles. In North Kingston, more than 15 people were evacuated from an apartment complex due to flooding.

Prior to the arrival of significant precipitation, the Mid-Atlantic and Northeast regions had an exceptionally wet August leading to elevated antecedent moisture conditions. Remnants of Tropical Storm Fred and Hurricane Henri contributed to the saturated soils and resulted in amplified flood impacts. In addition to tropical events, non-tropical heavy rainfalls in the region prior to the arrival of Ida elevated river levels and water tables inhibiting the ability for the natural systems to accommodate Ida’s precipitation. 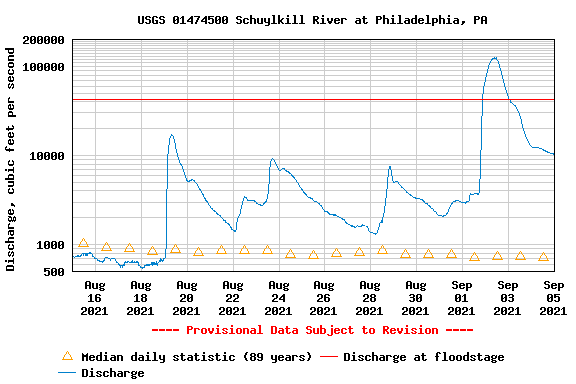 After Ida made landfall on August 29, it weakened rapidly to tropical storm and then tropical depression status while moving from the Northern Gulf Coast into the Tennessee Valley. As the center of circulation moved into the Appalachians on September 1, it interacted with a stalled frontal boundary running from the Midwest to the Mid-Atlantic. This interaction, together with abundant tropical moisture, produced unusually aggressive mechanics for precipitation, especially to the north and east of the center of circulation. The system produced excessive and historic rainfall as a result, with rainfall rates exceeding three inches per hour at times. General 24-hour accumulations in excess of five inches from southeast Pennsylvania to New England were estimated by the NWS, with embedded amounts exceeding ten inches. As Ida's remnants transformed into a frontal system it was reclassified as a post-tropical cyclone at 11AM EDT September 1. 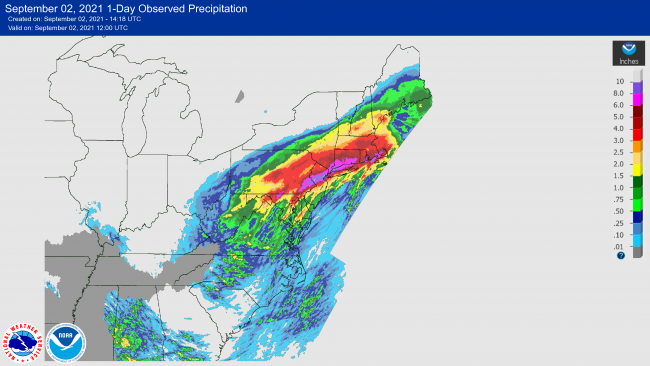 On the evening of Wednesday September 1, Central Park in New York City recorded 3 inches of rain in just a single hour, breaking the record previously set by TS Henri by over an inch. The massive rainfall and flash flooding caused numerous issues for commuters. Many subway lines were either completely shut down or running with extensive delays. Rising water levels on the Bronx River Parkway, Brooklyn Queens Expressway, and other major highways in the area created impassible conditions for drivers, forcing many to abandon their vehicles and swim to safety. The Schuylkill River in Philadelphia rose to its highest point in over 150 years and crested at 16.4 feet on the afternoon of Thursday September 2nd, causing the shutdown of the Vine Street Expressway.  Increased water levels caused flooding in areas along the river, notably the Manayunk, Logan Square, and Fitler Square neighborhoods. 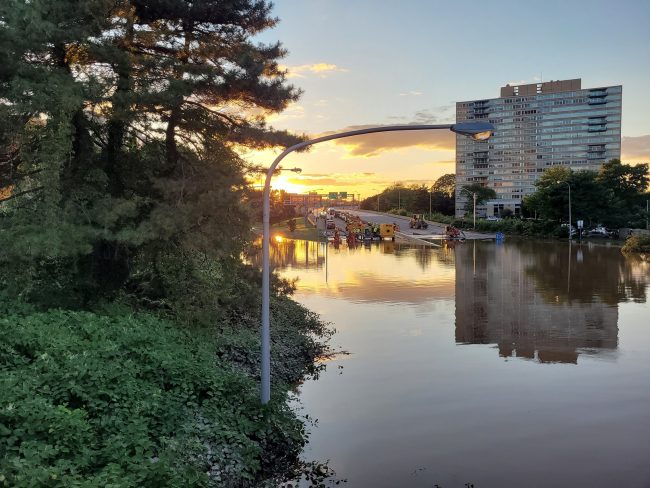 As the system moved into the Mid-Atlantic on September 1, portions of southeast Pennsylvania, Maryland, Delaware and New Jersey were exposed to very warm and unstable air, aided by a break in clouds and additional heating from the sun. Abundant tropical moisture was available in the meantime. In the meantime, changing wind direction and speed with elevation produced robust low-level spin. These conditions allowed rotating severe thunderstorm cells to develop in an environment that was “uncontaminated” by prior activity. These cells produced at least nine confirmed tornadoes across the region, including a devastating EF-3 in Gloucester Co., New Jersey, an EF-2 in Anne-Arundel Co., Maryland and an EF-2 in Bucks Co., Pennsylvania. The Gloucester Co. EF-3 caused extensive damage to affected property including complete roof removal and collapse of exterior walls.

Implications for the Insurance Industry

The Protection Gap for Flood

Understanding the full picture of flood impacts from Ida will take weeks as more information about insurance take up in the impacted areas becomes evident. Comparing the track of Hurricane Ida with the NFIP take-up rates we estimate that a significant portion of the impacted risks will be uninsured. As areas away from coastal communities continue to have very low flood insurance take ups, the burden of recovery shifts away from private balance sheets to the public purse. While loss estimates continue to develop, the protection gap between insured and insurable risks is evident and significant. 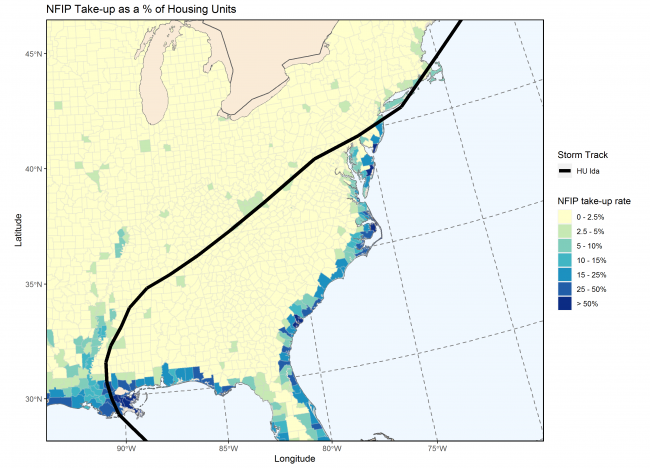 Rebuilding the infrastructure to power the electric grid across the central Gulf Coast region is ongoing.  On Sunday September 5, the primary utility for the region, Entergy, stated that the number of damaged and destroyed power poles from Ida exceeded that from Hurricanes Katrina, Ike, Delta and Zeta combined. 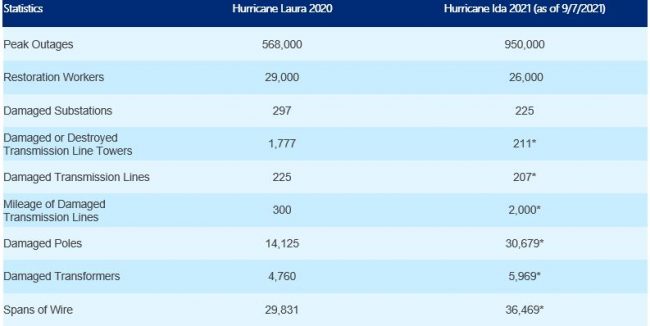 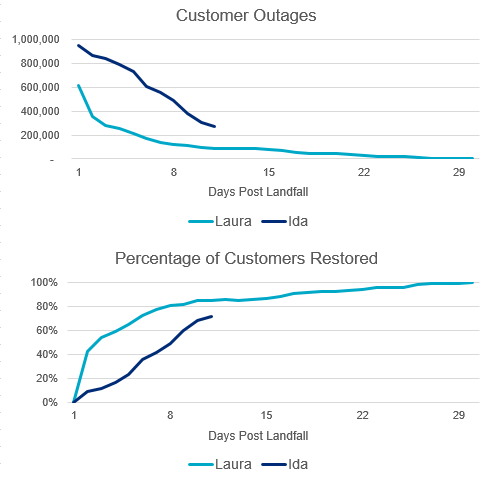 Key Dates in the Timeline of Hurricane Ida 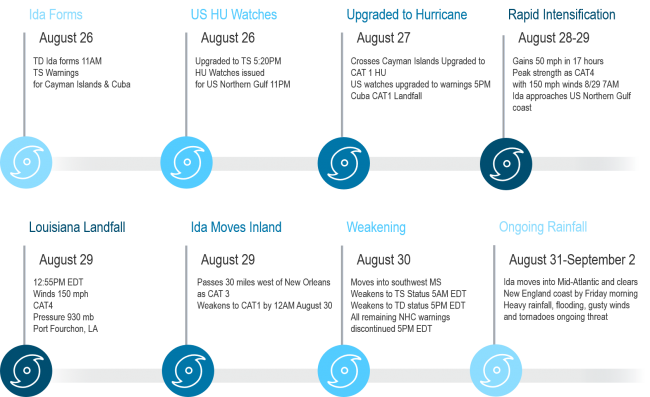