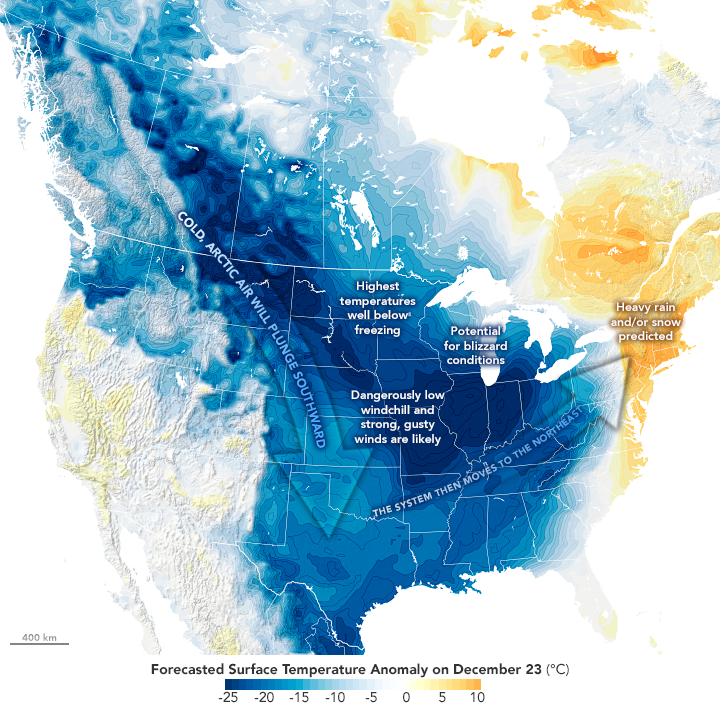 Driven by a strong Arctic cold front that formed as a significant low pressure system through the Great Lakes and eastern Canada, the Christmas 2022 Winter Storm (dubbed Elliott by media outlets) had widespread impacts from the Rocky Mountains to the Gulf of Mexico and Atlantic coast of North America.

Due to a strong surge of Pacific warmth extending north into Alaska and the Arctic region, an unseasonably strong Arctic air mass flowed into the US beginning late Tuesday, December 20. It cleared the East Coast of the US by Friday, December 23.  The onset of cold air and associated flash freeze declared the onset of this winter event on a regional basis. Timing of the onset of the Arctic air outbreak across the United States and eastern Canada. Source: NOAA.

The map below shows the ranking of the average minimum temperature over the seven day period of December 19-25 across the path of the Arctic outbreak.  Dark purple boxes with a “1” highlight the coldest December 19-25 on record for that location. The majority of cities east of the Rockies to the Appalachians experienced a top five or ten coldest pre-Christmas week on record.

A rapidly deepening low pressure formed over the Missouri River Valley as the cold front descended south, reaching rare levels for a bomb cyclone (at least 24 mb of deepening pressure within 24 hours). Most noteworthy aspects of the low pressure system included exceptionally strong low-level winds across the majority of the eastern US—the highest impacts of winds flowing east of the Great Lakes resulted in historical snowfalls and blizzard conditions. Persistent west-southwest winds behind the cold front aligned with the wind in an ideal trajectory to brings exceptional snow totals east of Lakes Michigan, Erie, and Ontario. The Buffalo, NY airport recorded 51.9” of snowfall; peak blizzard conditions transpiring on the 23rd and 24th with a peak wind gust of 72 mph and zero visibility. Season-to-date: Buffalo’s 92.7” of snow is more than triple the average 28.3” and only several inches short of the seasonal average of 95.4”. 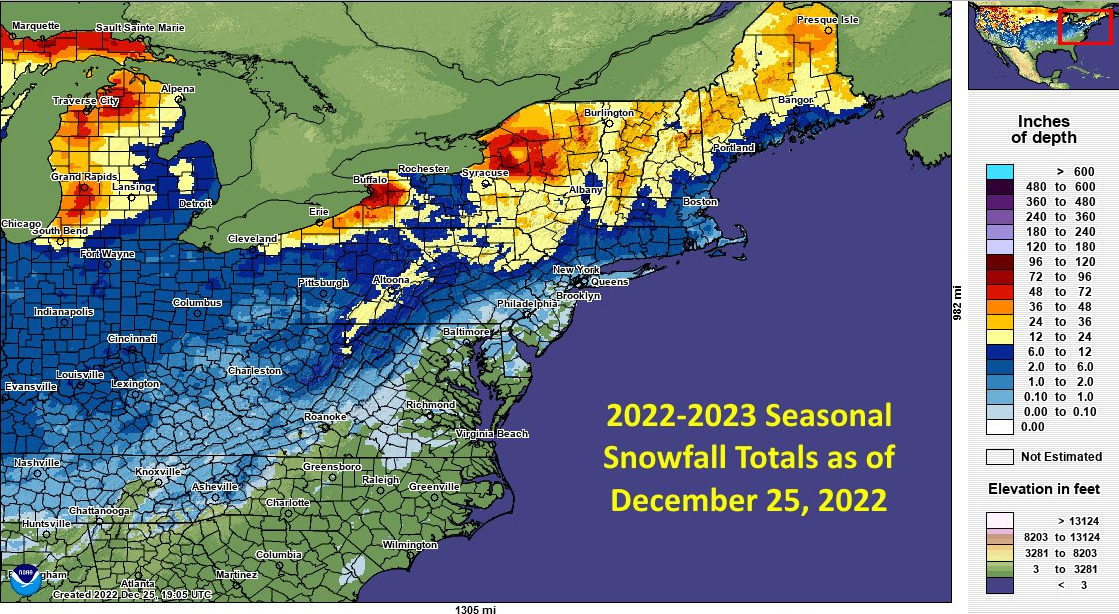 Seasonal snowfall totals for the Northeast US as of December 25, 2022. Source: NWS.

Implications for the Insurance Industry

The Winter Storm Severity Index is a new product issued by the National Weather Service incorporating various aspects of winter damage potential that could result in societal issues. Snow amount, snow load, ice accumulation, flash freeze, blowing snow and ground blizzards are quantified and accumulated within the WSSI value. For upstate New York, the excessive snow totals in the blizzard resulted in an WSSI ‘extreme impact’ being designated. Building codes in Buffalo, NY are enhanced to ensure heavy snowfall, including 48” frost depth, 90 mph wind design speeds and 50 lbs of ground snow load. Unfortunately, 32 fatalities in the region were attributed to stranded vehicles in snowbanks, frozen cars, and other medical emergencies associated with snow removal. 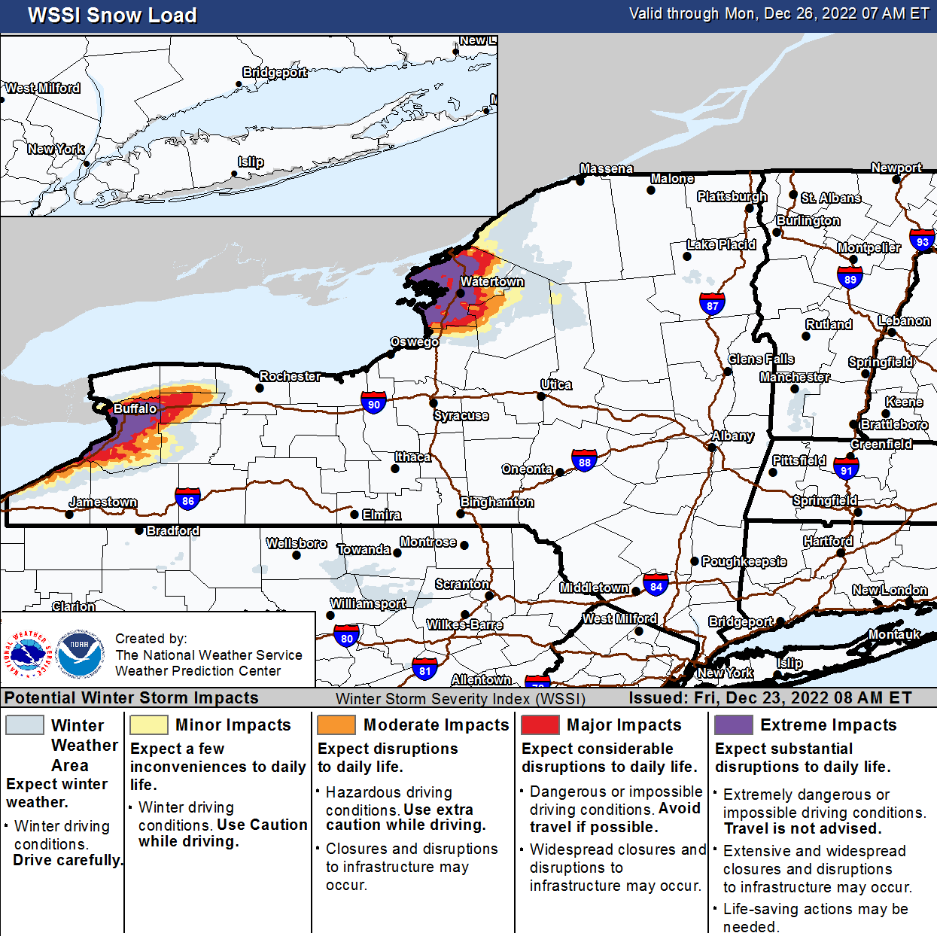 Burst Pipes in Southeastern US

The Late December 2022 event was not a Nor’easter blizzard, nor did exceptional power outages transpire. There was a peak outage of 1.6M customers across many states in contrast to 10M customers in 2021 and the Blizzard of 1993.

As seen in the Guy Carpenter selection of top analog historical events (at right), meteorological events with similar or stronger cold air magnitude and trajectory across the eastern US, have transpired four times since 1980.

Moreover, the core of coldest anomalies this year remained focused across the Northern Plains rather than centered in south Central US and Texas as seen in 2021, which results in a poor analog match.

Finally, while blizzard conditions were experienced downwind of the Great Lakes, the path of the low pressure system precluded an Eastern Seaboard track referred to as a nor’easter. As such, historical events such as Blizzard of 1993 and 1996, among others, were not good matches to this event. Guy Carpenter meteorological analogs to the December 2022 Winter Storm event. Of note, the December 1983 event includes significant agricultural losses in the southern US which did not transpire in this event. Source: NOAA Billion Dollar Database.