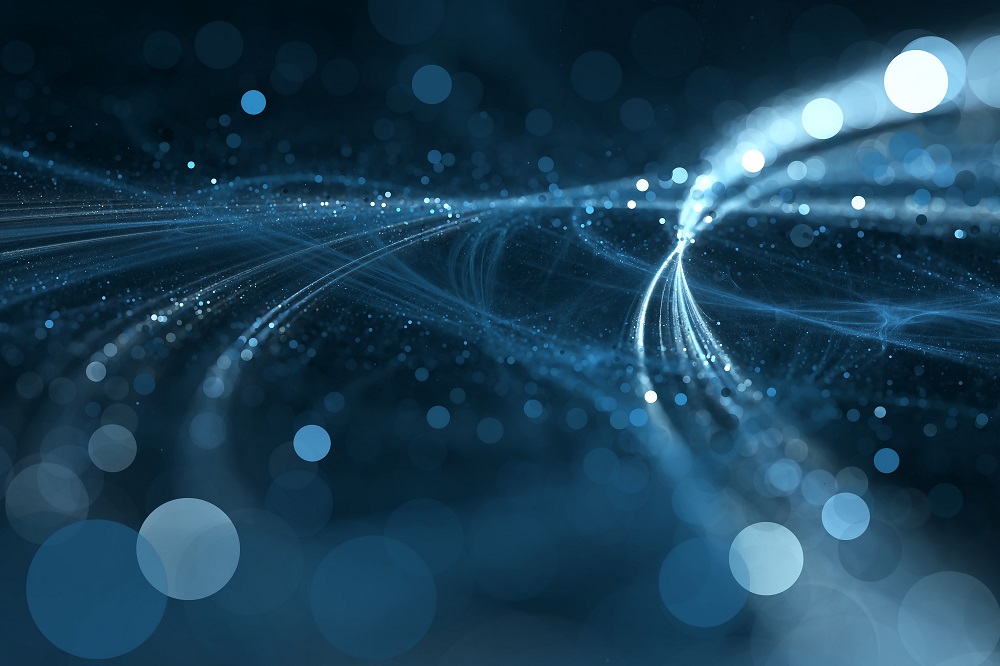 In late December 2021, the U.S. Court  of Appeals for the Second Circuit issued a blockbuster decision grappling with the Erie doctrine, stare decisis, and overturning a decades-old precedent. It was the fourth appellate decision in a lengthy litigation reminiscent of Dickens’ Bleak House. This was not litigation about constitutional rights or environmental justice, but a case about an unlikely subject: facultative reinsurance.

In Global Reinsurance v. Century Indemnity, the Second Circuit overturned a 1990 precedent that was notorious in the reinsurance industry, Bellefonte Reinsurance v. Aetna Cas. & Sur. This article tells the story of Global Re and the lessons it teaches regarding the interpretation of reinsurance contracts.

The ‘Bellefonte’ Presumption. Many liability insurance policies do not cap the insurer’s liability for the cost of defending the policyholder in litigation. As the Appleman treatise notes, defense costs are often “in addition to the policy limits of liability.” The same concept applies to the facultative contracts reinsuring defense-in-addition policies. As a commentator wrote in a prominent reinsurance journal, ARIAS US Quarterly (Eugene Wollan, First Quarter, 1999): “The understanding in the reinsurance world since time immemorial has been that the reinsurer’s share of expense is not charged against its limit of liability—in other words, the expense is in addition to the limit.”

Concurrency between insurance and reinsurance makes good sense. If defense costs were capped by the limit in a reinsurance contract, cedents (i.e., industry parlance for insurers who purchase reinsurance) would have a significant gap in reinsurance coverage. Cedents would be obligated to pay their insureds’ defense costs in excess of policy limits, but their reinsurers—who received the premium for that risk—would not cover those costs.

Enter Bellefonte in 1990. The issue was whether the $500,000 “Reinsurance Accepted” in a facultative certificate applied only to the policy-holder’s losses (i.e., settlements and judgments)—or to losses and defense costs. The Second Circuit held that the $500,000 limit was an all-in cap, and that “[a]ll other contractual language must be construed in light of that cap.”

The Second Circuit reconsidered the issue—whether a reinsurance limit capped the reinsurer’s liability for defense costs—three years later in Unigard Security Insurance Co. v. North River Insurance Co. This time, the cedent had powerful evidence to support its view—the reinsurer historically paid defense-in-addition and it claims handler even testified that the limit did not apply to defense costs. Nonetheless, the Second Circuit held that “Bellefonte’s gloss upon the written agreement is conclusive.” Unigard turned Bellefonte into a legal presumption that a general limit in a facultative certificate applies to losses and defense costs.

In 2004, the New York Court of Appeals made the Bellefonte presumption binding New York law. In Excess Ins. v. Factory Mut. Ins., the Court of Appeals held that the general limit of a facultative certificate was an all-in cap, stating “we follow … Bellefonte and Unigard.” The court held that all costs are covered by a liability cap unless the facultative certificate “expressly” states otherwise.

Although the Bellefonte-Unigard-Excess trilogy was at odds with reinsurance custom and practice, cedents could not contract around the Bellefonte presumption on legacy business involving long-tail risks written before Bellefonte was decided.

Notwithstanding that the Bellefonte presumption benefitted reinsurers, the Reinsurance Association of America decried the decision because it allowed opportunistic reinsurers to avoid obligations that were contemplated by the contracting parties. Likewise, arbitrators in reinsurance disputes, who are typically chosen for their industry experience, largely ignored Bellefonte. As the Wollan reinsurance treatise notes, arbitrators came “down firmly for custom and practice, and the Second Circuit be damned.”

The Long Road to ‘Global Re’. Global Re was a reprise of the Bellefonte-Unigard-Excess trilogy. Century Indemnity, the successor in interest to INA, the cedent, issued insurance policies to Caterpillar covering the period of 1962 to 1981. Caterpillar later faced thousands of asbestos lawsuits, and Century ultimately paid Caterpillar substantial defense costs above the indemnity limits in the policies. Global Re had issued facultative certificates reinsuring the Caterpillar policies.

Invoking the Bellefonte presumption, Global argued that its liability to Century was capped at the “Reinsurance Accepted” amount. The Southern District of New York agreed and granted summary judgment to Global.

On appeal, the Second Circuit confronted a stare decisis question. Acknowledging the force of an amicus brief submitted by Guy Carpenter and other reinsurance brokers, the court candidly stated that “we find it difficult to understand the Bellefonte court’s conclusion that the reinsurance certificate in that case unambiguously capped the reinsurer’s liability for both loss and expenses.” Nonetheless, the court explained that stare decisis counseled against overruling Bellefonte.

The court avoided the stare decisis question by invoking the Erie doctrine—the principle that federal courts exercising diversity jurisdiction are bound by state substantive law. As a matter of New York contract law, the New York Court of Appeals has the last word on the Bellefonte presumption—not the Second Circuit. Accordingly, the Second Circuit certified the question whether the Bellefonte presumption was correct to the Court of Appeals.

The Court of Appeals answered by disavowing the Bellefonte presumption. The court held that “New York law does not impose either a rule, or a presumption, that a limitation on liability clause necessarily caps all obligations owed by a reinsurer, such as defense costs, without regard for the specific language employed therein.” In other words, reinsurance contracts are governed by the same principles as other contracts.

With the Court of Appeals’ answer in hand, the Second Circuit remanded the case to the District Court with instructions to “construe each reinsurance policy solely in light of its language, and to the extent helpful, specific context.” The District Court held a multi-day evidentiary hearing, during which six experts testified about the meaning of the “Reinsurance Accepted” provision and other certificate terms. Relying heavily on industry custom and practice, the court reversed its prior ruling and held that the “Reinsurance Accepted” limit did not apply to defense costs when the reinsured policy pays defense costs in addition to limits. Global Re’s appeal set up a final showdown over the remaining viability of Bellefonte and Unigard.

‘Global Re’ Affirms the Importance of Industry Custom and Practice, and Concurrency. When Global Re returned to the Second Circuit for the last time, the court held that Bellefonte and Unigard are “no longer valid law in our circuit” and relegated those precedents to the “scrapheap of wrongly-decided cases.” Larry Schiffer, Schiffer on Re-Insurance blog, Dec. 29, 2021. Freed from Bellefonte, the court’s analysis exemplified the right approach to interpreting a reinsurance contract—a careful reading of contractual language in context and in light of industry custom and practice.

The facultative certificates stated that the “Reinsurance Accepted” varied over the years (from $250,000 to $2,000,000 per occurrence). A prefatory clause stated that the reinsurance was “subject to” the “limits of liability set forth herein.” The certificates included follow-form wording, which stated: “except as otherwise specifically provided herein,” the reinsurance was “subject in all respects to all the terms and conditions” of the underlying Caterpillar policies. In the underlying matter, Century paid defense costs in addition to limits.

The Second Circuit explained that facultative certificates are short, skeletal forms that adopt the terms and conditions of various underlying insurance policies. The court accepted expert testimony that concurrence is a “fundamental feature of facultative reinsurance.” Thus, unless a reinsurer explicitly opts out of a term in the underlying insurance, the certificate conforms to the underlying policy via the follow-form clause. The presumption of concurrence promotes the interests of both reinsurers and cedents by “eliminating the need to negotiate coverage conditions and draft particularized language” for every facultative certificate.

The well-accepted principle that “premium follows risk,” i.e., the party that takes the risk receives the premium for it, also supports concurrence. Under one certificate, for example, Century paid Global 50% of the net premium associated with a $500,000 layer of insurance. The “Reinsurance Accepted” was $250,000, or half of the layer (with other reinsurers taking the other 50% of this layer). The risk associated with the layer, however, was $500,000 plus a proportionate share of defense costs. If Global’s liability were capped at the $250,000 “Reinsurance Accepted”—inclusive of defense costs—it would have received 50% of the premium but assumed less than 50% of the risk. As the Second Circuit noted, no rational cedent would agree to pay that windfall—especially when all of the premium was laid off to reinsurers.

Context Is Everything. In contract interpretation, context is everything. That is why the New York Court of Appeals and Second Circuit rightly discarded the Bellefonte presumption. The presumption encouraged courts to ignore the relevant context of a reinsurance contract—i.e., follow-form clauses, industry custom and practice, the premium-follows-risk principle, and concurrency. Global Re puts the focus of reinsurance dispute resolution where it belongs: the meaning of language as understood in the context of industry norms and practice.

MICHAEL SEVI serves as general counsel and chief compliance officer of Guy Carpenter, where he leads the company’s global legal, compliance and regulatory functions. JOSHUA R. SCHWARTZ is managing counsel, global director of reinsurance litigation for Chubb. His team’s responsibilities include management of reinsurance disputes and pre-dispute counseling for Chubb entities, including Brandywine, Chubb Tempest Re, Chubb Tempest Life Re and the ceded reinsurance of Chubb’s insurance business.

Reprinted with permission from the May 16, 2022 edition of the New York Law Journal © 2022 ALM Global Properties, LLC. All rights reserved. Further duplication without permission is prohibited, contact 877-256-2472 or reprints@alm.com. 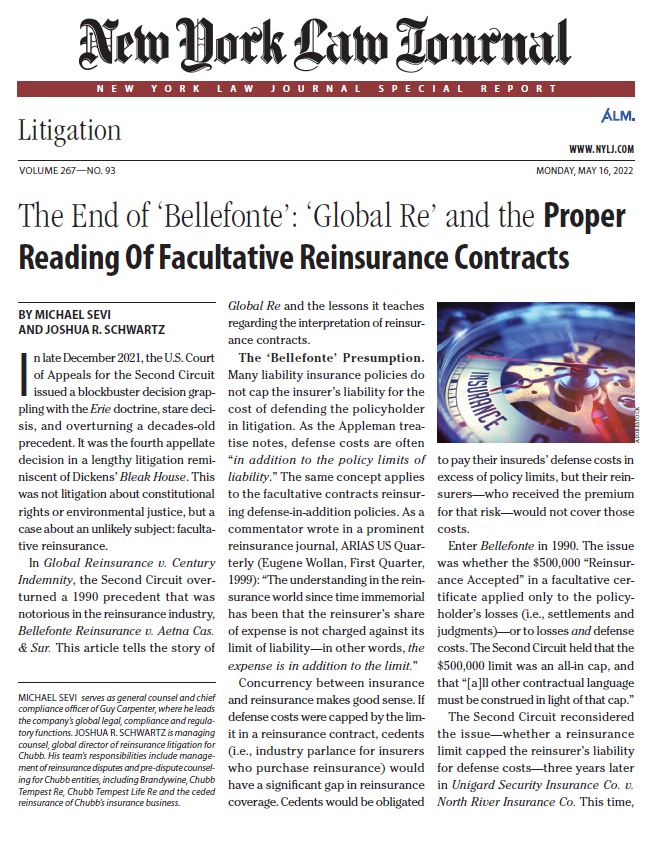 The End of 'Bellefonte'

'Global Re' and the Proper Reading of Facultative Reinsurance Contracts 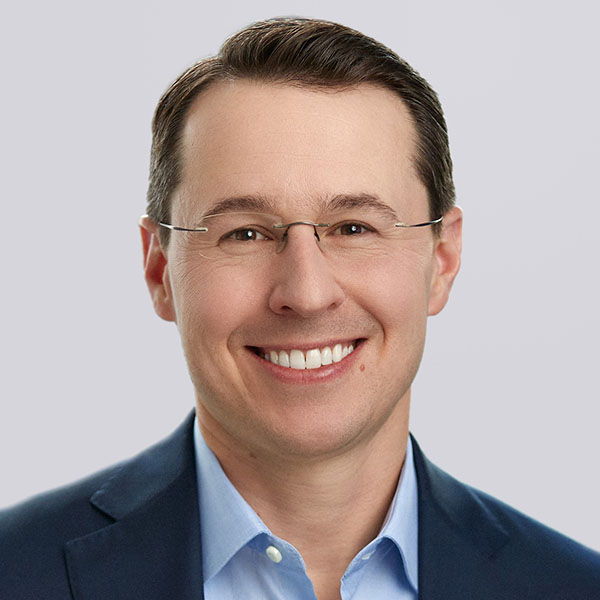