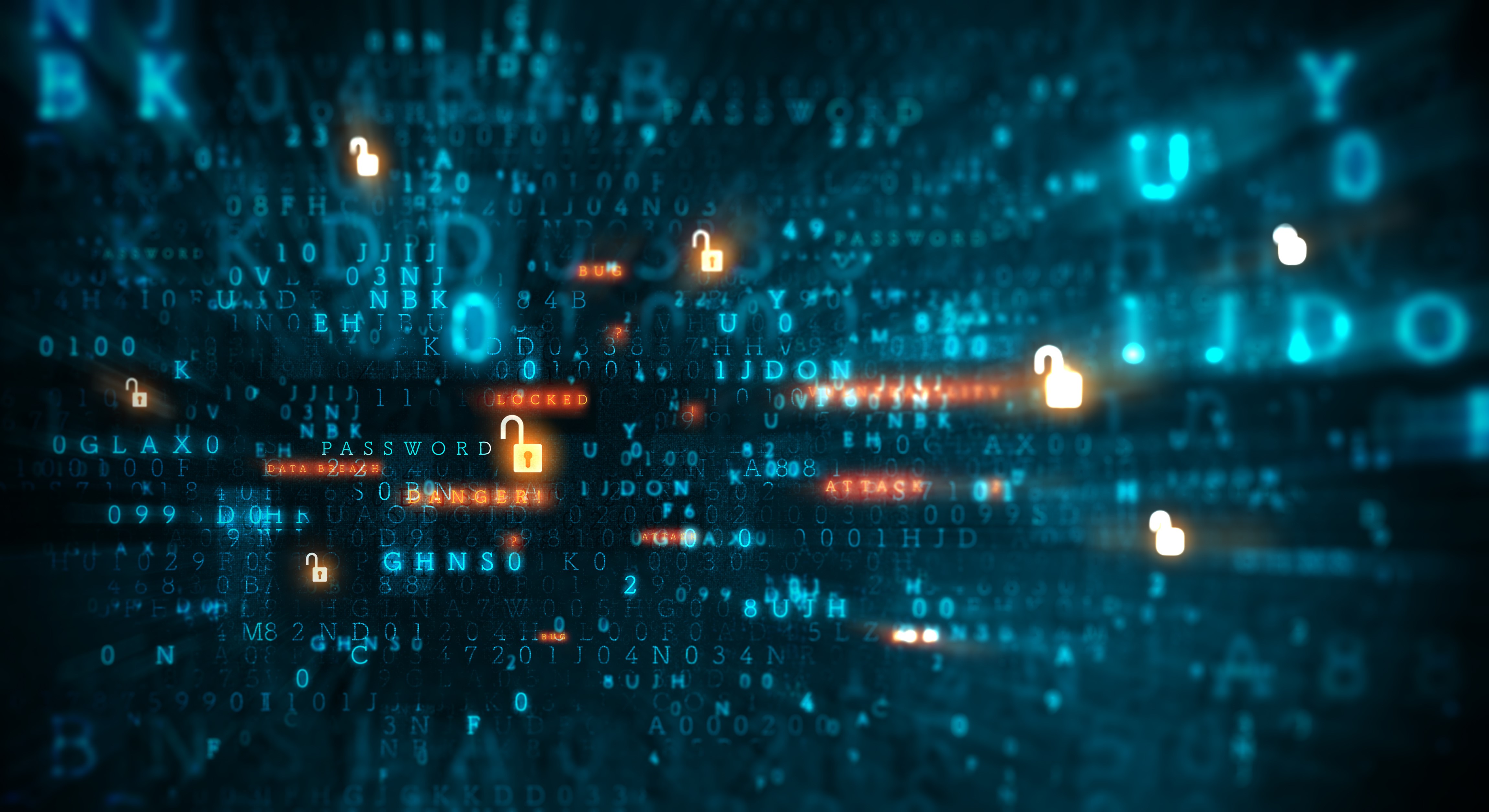 We suggest that stakeholders ask new questions. Over the last year-and-a-half, the Geneva Association, in collaboration with the International Forum of Terrorism Risk (Re)Insurance Pools (jointly referred to here as the Geneva Association), and Lloyd’s Market Association (LMA) have suggested better ways to think about—and clarify—coverage for state-sponsored cyber operations. This article explains the problems posed by traditional war exclusions in the cyber context and how recently drafted clauses, which markets have increasingly adopted, address these problems. We then consider reinsurance implications.

Traditional Questions of Attribution and Characterization

A war exclusion, as used in both standalone cyber policies and general property and liability policies, excludes losses caused by “war” or “warlike” actions. Wordings vary, but in practice, the exclusion turns on two key questions: first, is the loss-causing conduct attributable to a sovereign state? Second, is the loss-causing conduct properly characterizable as “warlike”? These questions create substantial uncertainty in the context of cyber operations.

Identifying the perpetrator of a cyber operation is challenging, costly and inexact. Governments are best positioned to identify perpetrators, but they may not do so publicly. If a government does make a public attribution, its assessment may be influenced by diplomacy, politics and even insurance implications. Further, different governments may take opposing positions on the attribution of a cyber operation.

Once a perpetrator is identified, the relationship between the perpetrator and the relevant state must be determined, which presents another challenging factual issue. Even assuming all the facts are known, a difficult question remains: What kind of state involvement is sufficient to attribute a cyber operation to the state? The wording of a war exclusion may provide little guidance.

It is equally uncertain whether courts will characterize cyber operations as warlike conduct under existing legal precedents governing kinetic warfare. The traditional factors—such as the proximity of a cyber operation to a “theater of war,” the presence of uniformed, weapon-carrying combatants, and the use of physical force—are ill-suited to determine whether a state-sponsored cyber operation is “warlike.” A cyber operation can serve a state’s military or diplomatic goals without physical force—for example, through espionage or data theft.

In June 2017, on the eve of Ukraine’s Constitution Day, NotPetya malware infiltrated the software of a small Ukrainian firm and then spread to digital media in other countries. NotPetya caused an estimated USD 10 billion of losses, including over USD 1.4 billion claimed by Merck. In 2018, the US publicly attributed the malware to the Russian military. NotPetya was launched in the context of intermittent armed conflict between the Ukrainian military and Russian separatist forces in Eastern Ukraine, which had resulted in thousands of civilian deaths since Russia annexed Crimea in 2014.

Merck had standalone cyber coverage, but the severe damage caused by NotPetya left it underinsured. Accordingly, Merck pursued a separate claim under its “all-risk” property policies. The insurers denied the claim, citing the policies’ war exclusion, which excluded losses caused by “hostile or warlike action” by an “agent” of a “government.” In response, Merck filed suit in New Jersey state court.

In its decision, the court avoided the questions of attribution (was the Russian government responsible for the cyber operation?) and characterization (was the cyber operation warlike conduct?) by stacking the deck against Merck’s insurers. The court invoked a technical principle of contract law called contra proferentum, which means that ambiguities in an exclusion should be resolved against the insurer and in favor of finding coverage. The court ruled that the war exclusion did not apply unless Merck’s interpretation of the exclusion was “entirely unreasonable.”

Measured against this high standard, the court “unhesitatingly” concluded that the war exclusion did not apply because no court had ever applied a war exclusion to “anything remotely close” to a cyber operation. According to the court, if the insurers wanted the exclusion to extend beyond “traditional forms of warfare,” they should have clarified their policy language.

The court’s reasoning is questionable. The New Jersey Supreme Court has held that the principle of contra proferentum does not apply to a sophisticated commercial insured like Merck. Additionally, the court did not explain why the broad language of the exclusion—“hostile” acts by a government “agent”—did not encompass cyber operations. Finally, the court ignored the fact that the NotPetya operation took place in the context of traditional forms of warfare in Eastern Ukraine. The decision sheds little light on questions of attribution and characterization of cyber operations. The Appellate Division of the New Jersey Superior Court granted the insurers permission to immediately appeal the ruling, signaling the importance of the issue and the need for clear guidance from a higher court.

The other closely watched case where an insurer invoked the war exclusion to deny cover for NotPetya losses, Mondelez International v. Zurich American Insurance Company (Cook County Circuit Court), recently settled during trial.  Thus, even after the Merck case is resolved, guidance on the application of the war exclusion to cyberattacks will exist in only one United States jurisdiction.

The Merck decision looks backward to an “all risk” property policy written in 2017. However, market participants have made important improvements to cyber cover in the last 5 years. Exposure to “silent cyber” in general property and liability policies—like the policies at issue in the Merck v. Ace et al. case—has been limited through explicit exclusions, affirmative coverage and sub-limits. Additionally, the war exclusion in standalone cyber policies often includes a carve-back for cyberterrorism, even when committed by a state actor.

Progress has also been made on the questions of attribution and characterization. With respect to attribution, industry groups have refined the need for state involvement. To streamline the analysis, the LMA’s model “Cyber War and Cyber Operation Exclusion Clauses" create a rebuttable presumption that an attribution by the government of the affected country is determinative. Meanwhile, the Geneva Association suggests a “spectrum of state responsibility” ranging from state-ignored conduct to state-executed conduct. Specific language regarding state involvement can reduce contract uncertainty.

More significant advances have been made with regard to characterization. The Geneva Association urges market participants to address whether coverage applies to “hostile cyber activity”—state-sponsored cyber operations that fall short of “war” or “warlike” conduct. LMA’s new cyber exclusions implement this approach. They are organized around the term “cyber operation,” which means “use of a computer system by or on behalf of a state to disrupt, deny, degrade, manipulate or destroy information in a computer system of or in another state.” This definition of “cyber operation” avoids the characterization question, as a policy can cover or exclude all cyber operations attributable to a state—regardless of whether they are “warlike.”

Of course, reinsurers and insurers may seek to limit coverage for state-sponsored cyber operations that have the potential for large, correlated losses. LMA exclusions try to provide flexibility in 2 ways. First, the model exclusions apply to cyber operations that have a “major detrimental impact” on the “functioning of a state” by impairing an “essential service” or the “security or defen[s]e of a state.” NotPetya, while harmful to Merck and other companies, did not impair an essential service vital to the functioning of a country. If NotPetya had triggered a widespread power outage, or disrupted a large proportion of a country’s food supply, this type of exclusion could apply. Second, the exclusions apply to a “cyber operation that is carried out in the course of war”—that is, a cyber operation that is part of traditional kinetic warfare.

The approaches suggested by the Geneva Association and LMA raise new questions. What level of “state responsibility” is sufficient for attribution? What is the threshold for an excluded cyber operation that impairs an “essential service” or the “functioning of a state”? But these are better questions—they form part of an ongoing dialogue to clarify coverage for cyber operations and to separate the insurable from the uninsurable.

Further, these questions can no longer be avoided. In August 2022, LMA issued a bulletin requiring managing agents to adopt contract language that addresses these questions in standalone cyber policies. Specifically, wordings must provide a “robust basis” to determine attribution, exclude cyber operations that significantly impair the functioning or security capabilities of state, and declare whether coverage exists outside a country whose functioning or security capabilities are substantially impaired by a cyber operation. Wording amendments to help clarify these issues are already being circulated in the market, and we expect the LMA to refine its guidance in response. Ultimately, this dialogue will help create a stronger market for cyber insurance. 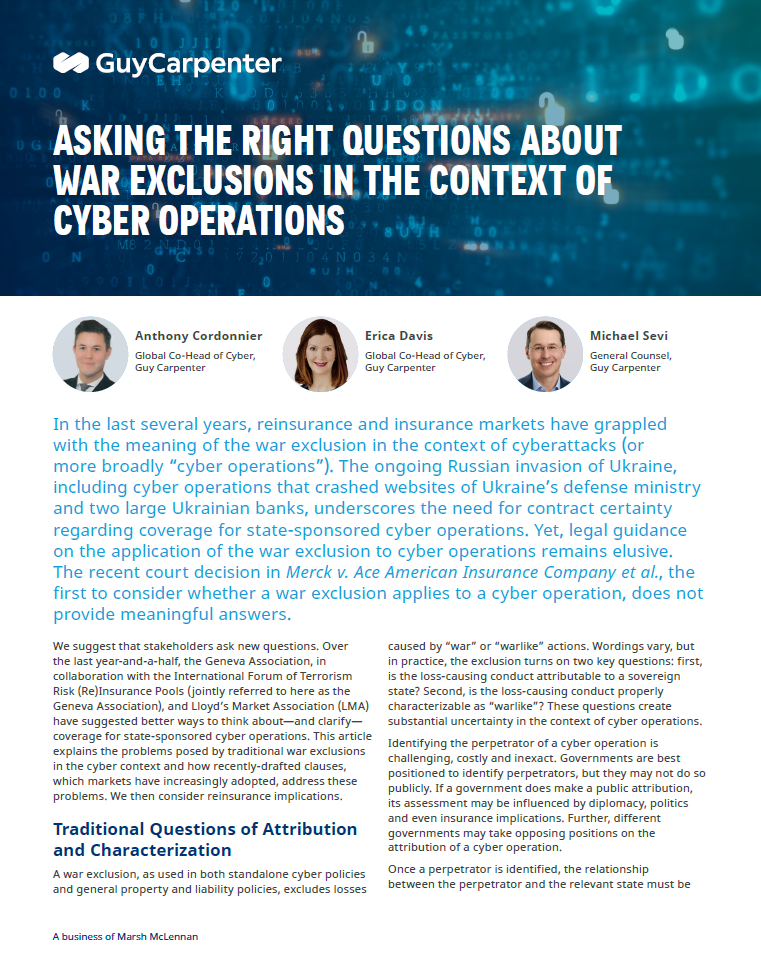