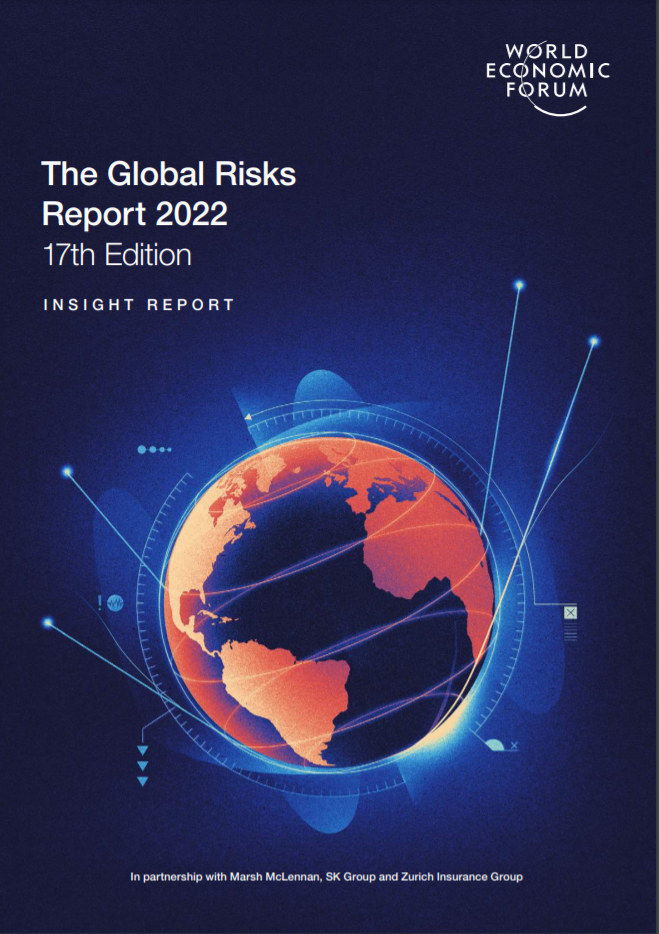 The Global Risks Report 2022, published by the World Economic Forum in collaboration with Marsh McLennan, examines how global divergence across multiple domains in the post-COVID-19 recovery threatens to widen disparities and aggravate societal fractures.

Drawing upon insights from over 950 experts and decision-makers worldwide, the 17th edition of the report unpacks some of the critical global tensions that may worsen the pandemic’s cascading impacts and complicate the coordination needed to tackle common challenges that include strengthening climate action, enhancing digital safety, restoring livelihoods and societal cohesion, and managing competition in space. It concludes with reflections on enhancing national and organizational resilience, informed by lessons from year two of the pandemic.

Download the Global Risks Report 2022, published by the World Economic Forum in collaboration with Marsh McLennan.

As 2022 begins, COVID-19 and its economic and societal consequences continue to pose a critical threat to the world. Vaccine inequality and a resultant uneven economic recovery risk compounding social fractures and geopolitical tensions. In the poorest 52 countries—home to 20% of the world’s people—only 6% of the population had been vaccinated at the time of writing. By 2024, developing economies (excluding China) will have fallen 5.5% below their pre-pandemic expected GDP growth, while advanced economies will have surpassed it by 0.9%—widening the global income gap.

The resulting global divergence will create tensions— within and across borders—that risk worsening the pandemic’s cascading impacts and complicating the coordination needed to tackle common challenges including strengthening climate action, enhancing digital safety, restoring livelihoods and societal cohesion and managing competition in space. The Global Risks Report 2022 presents the results of the latest Global Risks Perception Survey (GRPS), followed by an analysis of key risks emanating from current economic, societal, environmental and technological tensions. The report concludes with reflections on enhancing resilience, drawing from the lessons of the last two years of the COVID-19 pandemic. The key findings of the survey and the analysis are summarized below.

Asked to take a view of the past two years, respondents to the GRPS perceive societal risks—in the form of “social cohesion erosion”, “livelihood crises” and “mental health deterioration”—as those that have worsened the most since the pandemic began. Only 16% of respondents feel positive and optimistic about the outlook for the world, and just 11% believe the global recovery will accelerate. Most respondents instead expect the next three years to be characterized by either consistent volatility and multiple surprises or fractured trajectories that will separate relative winners and losers.

For the next five years, respondents again signal societal and environmental risks as the most concerning. However, over a 10-year horizon, the health of the planet dominates concerns: environmental risks are perceived to be the five most critical long-term threats to the world as well as the most potentially damaging to people and planet, with “climate action failure”, “extreme weather”, and “biodiversity loss” ranking as the top three most severe risks. Respondents also signalled “debt crises” and “geoeconomic confrontations” as among the most severe risks over the next 10 years.

Technological risks—such as “digital inequality” and “cybersecurity failure”—are other critical short- and medium-term threats to the world according to GRPS respondents, but these fall back in the rankings towards the long term and none appear among the most potentially severe, signalling a possible blind spot in risk perceptions.

Economic challenges flowing from the pandemic persist. The outlook remains weak: at the time of writing, the global economy was expected to be 2.3% smaller by 2024 than it would have been without the pandemic. Rising commodity prices, inflation and debt are emerging risks. Moreover, with another spike in COVID-19 cases towards the end of 2021, the pandemic continues to stifle countries’ ability to facilitate a sustained recovery.

The economic fallout from the pandemic is compounding with labour market imbalances, protectionism, and widening digital, education and skills gaps that risk splitting the world into divergent trajectories. In some countries, rapid vaccine rollout, successful digital transformations and new growth opportunities could mean a return to pre-pandemic trends in the short term and the possibility of a more resilient outlook over a longer horizon. Yet many other countries will be held back by low rates of vaccination, continued acute stress on health systems, digital divides and stagnant job markets. These divergences will complicate the international collaboration needed to address the worsening impacts of climate change, manage migration flows and combat dangerous cyber-risks.

Short-term domestic pressures will make it harder for governments to focus on long-term priorities and will limit the political capital allocated to global concerns. “Social cohesion erosion” is a top short-term threat in 31 countries—including Argentina, France, Germany, Mexico and South Africa from the G20. Disparities that were already challenging societies are now expected to widen—51 million more people are projected to live in extreme poverty compared to the pre-pandemic trend— at the risk of increasing polarization and resentment within societies. At the same time, domestic pressures risk stronger national interest postures and worsening fractures in the global economy that will come at the expense of foreign aid and cooperation.

Respondents to the GRPS rank “climate action failure” as the number one long-term threat to the world and the risk with potentially the most severe impacts over the next decade. Climate change is already manifesting rapidly in the form of droughts, fires, floods, resource scarcity and species loss, among other impacts. In 2020, multiple cities around the world experienced extreme temperatures not seen for years—such as a record high of 42.7°C in Madrid and a 72-year low of -19°C in Dallas, and regions like the Arctic Circle have averaged summer temperatures 10°C higher than in prior years. Governments, businesses and societies are facing increasing pressure to thwart the worst consequences. Yet a disorderly climate transition characterized by divergent trajectories worldwide and across sectors will further drive apart countries and bifurcate societies, creating barriers to cooperation.

Given the complexities of technological, economic and societal change at this scale, and the insufficient nature of current commitments, it is likely that any transition that achieves the net zero goal by 2050 will be disorderly. While COVID-19 lockdowns saw a global dip in greenhouse gas (GHG) emissions, upward trajectories soon resumed: the GHG emission rate rose faster in 2020 than the average over the last decade. Countries continuing down the path of reliance on carbon-intensive sectors risk losing competitive advantage through a higher cost of carbon, reduced resilience, failure to keep up with technological innovation and limited leverage in trade agreements. Yet shifting away from carbon-intense industries, which currently employ millions of workers, will trigger economic volatility, deepen unemployment and increase societal and geopolitical tensions. Adopting hasty environmental policies will also have unintended consequences for nature—there are still many unknown risks from deploying untested biotechnical and geoengineering technologies—while lack of public support for land use transitions or new pricing schemes will create political complications that further slow action. A transition that fails to account for societal implications will exacerbate inequalities within and between countries, heightening geopolitical frictions.

Growing dependency on digital systems—intensified by COVID-19—has altered societies. Over the last 18 months, industries have undergone rapid digitalization, workers have shifted to remote working where possible, and platforms and devices facilitating this change have proliferated. At the same time, cybersecurity threats are growing—in 2020, malware and ransomware attacks increased by 358% and 435% respectively—and are outpacing societies’ ability to effectively prevent or respond to them. Lower barriers to entry for cyberthreat actors, more aggressive attack methods, a dearth of cybersecurity professionals and patchwork governance mechanisms are all aggravating the risk.

Attacks on large and strategic systems will carry cascading physical consequences across societies, while prevention will inevitably entail higher costs. Intangible risks—such as disinformation, fraud and lack of digital safety—will also impact public trust in digital systems. Greater cyber threats will also hamper cooperation between states if governments continue to follow unilateral paths to control risks. As attacks become more severe and broadly impactful, already sharp tensions between governments impacted by cybercrime and governments complicit in their commission will rise as cybersecurity becomes another wedge for divergence—rather than cooperation—among nation-states.

Growing insecurity resulting from economic hardship, intensifying impacts of climate change and political instability are already forcing millions to leave their homes in search of a better future abroad. “Involuntary migration” is a top long-term concern for GRPS respondents, while 60% of them see “migration and refugees” as an area where international mitigation efforts have “not started” or are in “early development”. In 2020, there were over 34 million people displaced abroad globally from conflict alone—a historical high. However, in many countries, the lingering effects of the pandemic, increased economic protectionism and new labour market dynamics are resulting in higher barriers to entry for migrants who might seek opportunity or refuge.

These higher barriers to migration, and their spillover effect on remittances—a critical lifeline for some developing countries—risk precluding a potential pathway to restoring livelihoods, maintaining political stability and closing income and labour gaps. At the time of writing, the United States faced over 11 million unfilled jobs in general and the European Union had a deficit of 400,000 drivers just in the trucking industry. In the most extreme cases, humanitarian crises will worsen since vulnerable groups have no choice but to embark on more dangerous journeys. Migration pressures will also exacerbate international tensions as it is increasingly used as a geopolitical instrument. Destination country governments will have to manage diplomatic relationships and immigrant skepticism among their populations.

Opportunities in space could be constrained by frictions

While humans have been exploring space for decades, recent years have witnessed increased activity, not only creating new opportunities but also signalling an emerging realm of risk, particularly with growing militarization and weaponization in the arena. New commercial satellite market entrants are disrupting incumbents’ traditional influence over the global space commons in delivering satellite services, notably internet-related communications. A greater number and range of actors operating in space could generate frictions if space exploration and exploitation are not responsibly managed. With limited and outdated global governance in place to regulate space alongside diverging national-level policies, risks are intensifying.

One consequence of accelerated space activity is a higher risk of collisions that could lead to a proliferation of space debris and impact the orbits that host infrastructure for key systems on Earth, damage valuable space equipment or spark international tensions. Limited governance tools increase the likelihood of space activity escalating geopolitical tensions, and recent weapons tests in space underscore such risks. Increased space activity could also lead to unknown environmental impacts or raise costs for public goods such as weather monitoring or climate change surveillance.

Year two of the pandemic yields insights on resilience

In 2021, countries deployed new mechanisms to respond to a public health crisis with shifting characteristics, leading to both successes and failures. Two interlinked factors were critical for effective management of the pandemic: first, the readiness of governments to adjust and modify response strategies according to changing circumstances; and second, their ability to maintain societal trust through principled decisions and effective communication.

Reflecting on the distinct resilience goals of governments, businesses and communities will help ensure that agendas are aligned in achieving a whole of- society approach to tackling critical risks of any nature. For governments, balancing costs, regulating for resilience and adjusting data-sharing arrangements to ensure sharper crisis management are key to galvanizing stronger interaction between public and private sectors. Businesses—recognizing that better national-level preparedness is critical for planning, investing and executing their strategies—can leverage opportunities in areas such as supply chains, codes of conduct within their industry and inclusion of a resilience dimension into workforce benefit offerings. Communities can help local governments to join up with national efforts, improve communication and support grassroots resilience efforts. At an organizational level, strategies such as grounding resilience analyses in key delivery requirements, appreciating systemic vulnerabilities and embracing a diversity of approaches can help leaders build better resilience as well.

To read all the chapters, download the full report

The Global Risks Report 2022, published by the World Economic Forum in collaboration with Marsh McLennan, examines how global divergence across multiple domains in the post-COVID-19 recovery threatens to widen disparities and aggravate societal fractures.

Lessons for Climate from Covid